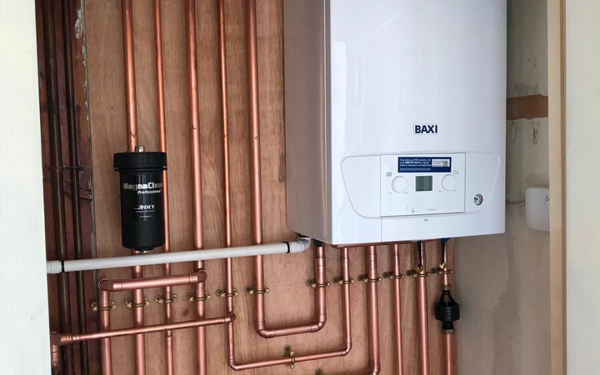 Before the invention of the modern boiler, people relied on wood and coal fires in order to  supply them with hot water and heat their homes. This was a lot of work. It meant lighting, tending to and cleaning a fire in every room that you wanted to be comfortable in.

Today this would be an unthinkable inconvenience for most people. Fortunately we now have boilers to do the hard work for us. There are three main types of boilers. These are:

If your boiler is showing signs that it might be giving up, then it’s time to consider your next one. Here we will tell you everything you need to know about each of these boiler types. We will also tell you the pros and cons of each of them.

A combination boiler (more often known as a combi boiler) is the most common type of boiler system used in the UK. A combi boiler is capable of providing hot water on demand. It is therefore a great choice for the majority of households. However, a combi boiler isn’t suitable for everyone.

A combi boiler will allow the hot water within your home to be heated on demand. So you can get hot water as and when you need it. This means that water isn’t heated unnecessarily, and therefore could help to reduce your energy costs. A combi boiler heats the water as it enters your property via the mains. This means that there is no need for a bulky expansion tank in your loft. In fact, a combi boiler is all you need to be able to get hot water for your household. As a result, much less space is wasted overall. Not only that, but the entire hot water system within your home will look neater and more compact. This is why combi boilers are so popular with newbuild properties, where space is often at a premium.

The main problem with combi boilers however, is the complexity of them.

A combi boiler contains many moving parts when compared to a conventional boiler. As with all complexed machinery, this means that there is a larger scope for things to go wrong . If your boiler breaks down, then it means that you have no access to hot water. Hot water is important for sanitation as well as heating your home.

Combi boilers are only really useful for smaller households, where there will be less demand for hot water. The hot water from a combi boiler system can only be used for one task at a time. This can be an issue in larger households. For example, if one person wishes to have a shower while someone else is running the hot tap downstairs at the same time.

Heat-only boilers (also referred to as conventional boilers) contain components that are housed outside of the boiler itself. Such components can be a circulation pump or water tank. Typically a heat-only boiler system will also require cold water. With conventional boiler system, the hot water is stored in a hot water cylinder or storage tank. This is often housed within the airing cupboard. Such systems will often have an on and off switch. This allows you to heat the water stored in the cylinder when you are going to need it. You can then leave it switched off when not in use to save energy costs.

In larger households, it’s more likely that several people are going to want to use hot water at the same time. A conventional boiler is useful here. It means that the hot water stored in the cylinder can be delivered to whoever needs it.

A conventional boiler uses water that is stored in a tank, so you will need to wait until this water is heated up before you get hot water. This isn’t usually much of an issue in itself. The tanks are well-insulated to keep the water hot for long periods of time. A problem can occur when the water from the tank is used up. For example, after someone has run a bath. Once the hot water in the cylinder is gone, you will need to wait for more water to be heated.

Over time, the water stored in the hot water cylinder will lose heat. This means that more energy will need to be used in order to heat it up again. This isn’t a huge problem, but it makes conventional boilers systems less efficient than combi boiler systems.

A system boiler still needs a hot water cylinder to store hot water. The feed and expansion tank (which can usually be found in the loft) is replaced by an expansion vessel in the boiler itself. This vessel will also typically contain the circulation pump as well as some of the valves.

If you live in a large house or a household with lots of people, then a system boiler will be useful as it will allow hot water to be drawn from more than one tap at a time. This means that it’s possible to have a shower in one room, while someone else is using hot water in another. And, unlike conventional boiler systems you won’t need a large cold water tank in the loft of your home, which will of course save space. If you live in an area where the water pressure from the mains is low, then a system boiler will be an excellent choice.

You will also have the same efficiency issues with a system boiler as you would with a conventional boiler.

The water stored in the hot water tank will cool over a period of time, and therefore energy will be used to keep it hot. And, just like with a conventional boiler, a system boiler will only supply a limited amount of hot water (dependent on the size of your hot water cylinder), before you need to wait for more water to be heated again.

Which Type of Boiler should I Choose?

All three types of boilers come with advantages and disadvantages of their own. In a nutshell, if you live in a small house and have a small household, then a combi boiler will probably be more than suitable. Not only are combi boilers more energy efficient than conventional or system boilers, but they also require less space to install. The disadvantage of taking up less space, is that there are more components within the boiler housing unit itself, which increases the chances of something going wrong and a potentially costly repair.

If you live as part of a larger household, but space is still an issue, then a system boiler could be the perfect compromise. System boilers can cope with more hot water demand than combi boilers, and they don’t require a large cold water tank in the loft. The disadvantage of this type of system is that the hot water available is limited to the capacity of the hot water storage tank, and it is not as energy efficient as a combi boiler. It would also cost more money to have a system boiler installed due to the fact that it contains more components overall.

If you live in a larger household and space is not an issue, then a conventional boiler system would be the ideal solution. This would mean that you’d have sufficient hot water for all of your household’s needs. The boiler itself would be cheaper than a system boiler, but you would still have the slight issue of it being less efficient than a combi boiler.

Whatever type of boiler you choose, make sure to protect your investment by taking out boiler cover. At compareboilercover.co.uk you can see quotes at a glance and choose the right boiler cover to suit your needs.

What’s so good about a combi boiler?

Not only is a combi boiler more energy efficient than a conventional or system boiler, but it also has less external components. This means that the central heating and hot water systems take up less space, and it looks a lot neater overall.

Is a combi boiler useful for larger households?

A combi boiler is a very efficient way of getting hot water. However, it is unable to cope with high demand. Therefore if you live in a large household where hot water would often be needed in several places at once, it’s best to have either a conventional or system boiler in place.

It’s true that conventional boilers aren’t as energy-efficient as combi boilers. However, they are not necessarily uneconomical. The main energyh loss with a conventional boiler system comes from the fact that heated water is stored in a tank, which will therefore gradually lose heat over the course of time.

5 thoughts on “Three Main Boiler Types in the UK”

We use cookies on our website to give you the most relevant experience by remembering your preferences and repeat visits. By clicking “Accept All”, you consent to the use of ALL the cookies. However, you may visit "Cookie Settings" to provide a controlled consent.
Cookie SettingsAccept All
Manage consent

This website uses cookies to improve your experience while you navigate through the website. Out of these, the cookies that are categorized as necessary are stored on your browser as they are essential for the working of basic functionalities of the website. We also use third-party cookies that help us analyze and understand how you use this website. These cookies will be stored in your browser only with your consent. You also have the option to opt-out of these cookies. But opting out of some of these cookies may affect your browsing experience.
Necessary Always Enabled
Necessary cookies are absolutely essential for the website to function properly. This category only includes cookies that ensures basic functionalities and security features of the website. These cookies do not store any personal information.
Non-necessary
Any cookies that may not be particularly necessary for the website to function and is used specifically to collect user personal data via analytics, ads, other embedded contents are termed as non-necessary cookies. It is mandatory to procure user consent prior to running these cookies on your website.
SAVE & ACCEPT